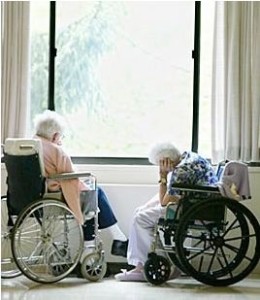 Here is a story that I shared in church on Sunday. Mabel's life is an amazing example of someone who found joy and power in Jesus. I encourage you to read it.

I got it from William Lane Craig's, Defender 3 series, here is the link to the podcast transcript. He is telling the story of a colleague of his, Thomas Schmidt.


Few of us, I think, really understand this truth. But I had a colleague when I taught at Westmont College who got to know a woman who did understand this. He used to make it a practice of his to visit shut-ins in nursing homes in the community in an attempt to bring some bit of cheer and love into their lives. One Mother’s Day he was visiting a nursing home in which he met a woman whom he would never forget. This is his account of that woman and that friendship.[2] He says:

On this particular day I was walking in a hallway that I had not visited before looking in vain for a few who were alive enough to receive a flower and a few words of encouragement. This hallway seemed to contain some of the worst cases. Strapped onto carts or into wheelchairs and looking completely helpless.
As I neared the end of this hallway I saw an old woman strapped in a wheelchair, her face was an absolute horror. The empty stare and white pupils of her eyes told me that she was blind. The large hearing aid over one ear told me that she was almost deaf. One side of her face was being eaten by cancer. There was a discolored and running sore covering part of one cheek and it had pushed her nose to the side, dropped one eye and distorted her jaw so that what should have been the corner of her mouth was the bottom of her mouth. As a consequence, she drooled constantly. I also learned later that this woman was 89 years old and that she had been bedridden, blind, nearly deaf and alone for 25 years. This was Mabel.
I don’t know why I spoke to her. She looked less likely to respond than most of the people I saw in that hallway. But I put a flower in her hand and said, “Here is a flower for you, Happy Mother’s Day.” She held the flower up to her face and tried to smell it and then she spoke and much to my surprise her words, though somewhat garbled because of her deformity, were obviously produced by a clear mind. She said, “Thank you, it’s lovely, but can I give it to someone else? I can’t see it you know, I’m blind.”
I said, “of course,” and I pushed her in her chair back down the hallway to a place where I thought I could find some alert patients. I found one and stopped the chair. Mabel held out the flower and said, “Here, this is from Jesus.”
It was then that it began to dawn on me that this was not an ordinary human being. . . . Mabel and I became friends over the next few weeks and I went to see her once or twice a week for the next three years. . . . It was not many weeks before I turned from a sense that I was being helpful to a sense of wonder. And I would go to her with a pen and paper to write down the things she would say. . . .
During one hectic week of final exams, I was frustrated because my mind seemed to be pulled in ten directions at once with all of the things that I had to think about. The question occurred to me, what does Mabel have to think about? Hour after hour, day after day, week after week, not even able to know if it is day or night. So I went to her and asked, “Mabel, what do you think about when you lie here?”
And she said, “I think about my Jesus.”
I sat there and thought for a moment about the difficulty for me of thinking about Jesus for even five minutes. And I asked, “What do you think about Jesus?” She replied slowly and deliberately as I wrote, and this is what she said,
I think how good he has been to me. He has been awfully good to me in my life, you know. . . . I’m one of those kind who’s mostly satisfied. . . . Lots of folks would think I’m kind of old-fashioned. But I don’t care. I’d rather have Jesus, he is all the world to me.
And then Mabel began to sing an old hymn:
Jesus is all the world to me,
My life, my joy, my all.
He is my strength from day to day,
Without him, I would fall.
When I am sad, to him I go.
No other one can cheer me so.
When I am sad, he makes me glad.
He’s my friend.
This is not fiction. Incredible as it may seem, a human being really lived like this. I know, I knew her. How could she do it? Seconds ticked and minutes crawled, and so did days and weeks and months and years of pain without human company and without an explanation of why it was all happening – and she laid there and sang hymns.[3] How could she do it?
The answer, I think, is that Mabel had something that you and I don’t have much of. She had power. Lying there, in that bed, unable to move, unable to see, unable to hear, unable to talk to anyone . . . , she had incredible power.[4]